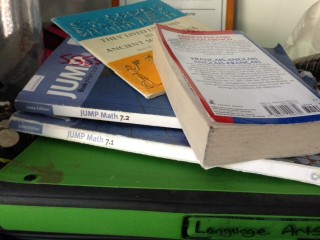 The back to school ads are on television, school supplies are filling the store aisles, and the kids have grown three inches over the summer. Parents are beginning to organize shopping excursions to outfit their children and stock up on needed supplies. The mad dash to register for activities and coordinate the schedule has begun. Yes, August is moving along quickly, and the natural flow of the season has us thinking about change and gearing up for the beginning of the school year.

There is usually a mixture of feelings at the end of August; disappointment that the summer is coming to an end and the anticipation of what the next school year will bring. But wait…something is wrong with this picture! Children who attend public school in British Columbia, along with their parents, are ready to start planning but the reality is that we are hanging in suspension.  There is no confirmed date for the beginning of the new school year. Many are forging ahead and trying to plan as usual, but most are experiencing some sort of disorientation due to the unresolved teachers’ strike.

Hanging in suspension is the antithesis of movement and vitality. Humans do not do well in suspension – we need movement. The lack of resolution with the teachers’ strike has created a mass uncertainty in this province. We just need to look to nature to understand why movement is essential. Both nature and humanity are at their best when experiencing ‘flow’. Time moves much like a river; as long as it is flowing it brings energy and creativity. Without movement things become stagnant and the energy wanes, and often becomes destructive. When water flows it creates enough energy to light a city, but when water becomes stagnant it breeds unhealthy bacteria.

As humans, we become listless and even lifeless without movement. If our children are left hanging in school suspension too much longer it will begin to have some significant side effects. The anticipation of something new can be a bit nerve racking, but it is also exciting. It is through change and movement that we learn about ourselves and develop new life skills. Hanging in suspension is much different than the excitement of anticipation. If you are able to direct a nervous energy, it can give you energy and assist in achieving your goals. Nervous energy hung in suspension can become debilitating anxiety, frustration and rage. Eventually energy has to move, but left in limbo too long it becomes destructive.

Students and families mark their year by the school year. In fact, for many families the beginning of September feels more like the new year than January 1st. Can you imagine a situation where you were told that January 1st will not be the New Year this year, and that you are expected to just hold on until it is figured out? A worse scenario would be one is which the “powers that be” do not apologize for the lack of action, nor do they appear highly motivated to resolve the New Year’s dilemma. How would people handle that? No New Year celebration, no reflection on the past and no plan for the next year. In many ways that is what is happening in the province of British Columbia for a lot of people this year, and families and children are beginning to feel unimportant and disillusioned.

As a therapist, I specialize in assisting families through separation and divorce and this entire impasse has reminded me of the dynamics that exist between high conflict parents when they are divorcing. In the case of a high conflict divorce, the collateral damage is always the children. I try to help parents understand that they need to stay in the lead through the divorce, demonstrate respect and dignity, and guide their children through change. When parents lose the lead they also lose the respect of their children. I feel that this is what is happening on a provincial scale in British Columbia right now. If this strike does not get resolved soon, the children in this province will lose faith in the system and the adults running the system. Although every political system is flawed (as is every human being) we still want to show our youth that compromise is possible and we can achieve resolution, even if the process lacks grace and there is a stumble or two on the way.

We do not want our children hanging in limbo. The Webster dictionary defines limbo as “a place or state of neglect or oblivion”. We want families to be able to feel the nervous excitement of anticipation and plan their year. However, childcare plans are currently up in the air, plans for spring break and the Christmas holidays are uncertain, and some parents are not even able to finalize their own work schedules due to the teachers’ strike.

In the same way that I encourage parents to find collaborative resolution’s during a divorce, I encourage the Government of BC and the BCTF to negotiate in good faith and do the same. Take our children out of limbo and reaffirm faith in the system. Release us from suspension and let the children and families in this province get back to a flow that is natural and healthy.

Alyson is a featured columnist in the Huffington Post, where she uses the MORE principles and her authentic and enthusiastic personality to weigh in on news and cultural events.